TBUG is an incorporated not-for-profit organisation working towards building a strong community whilst increasing cycle awareness and safety in and around the Tamar region.

TBUG Strategic Plan 2020 – A clear statement of what we are about and what we are trying to do. 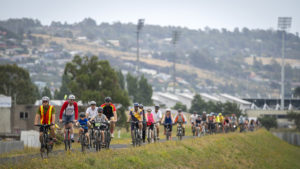 Our priority is to get more people riding bikes across our region.

Our advocacy is targeted at existing commuter and recreational riders and the group of people who think about riding for commuter/shopper and/or for recreational/ purposes and would like to do it but are somewhat nervous about actually getting started.

Current research and our own small surveys as in Bike Week 2018 and 2019 indicate that the biggest barrier is the real and perceived lack of dedicated bike infrastructure and a somewhat hostile culture reflected in community priorities and the behaviours of other users.

Our agenda aims to address these barriers through the implementation of specific achievable and affordable projects and strategies.

Making our city and region more active transport friendly would have enormous , social and environmental benefits that would repay costs many times over.

Our agenda reflects the vision and priorities of City of Launceston’s Bike and Pedestrian Strategy, The City Heart Project /City Deal and the Gehl Report, (2004)

2. Implement previously agreed changes to CBD traffic flow in Paterson, Charles, York and George Sts to calm traffic and promote a people/business friendly CBD. This would include wider footpaths and dedicated bike lanes and is a key element of the City Heart Project and Gehl Report. Work with City of Launceston and other stakeholders such as UTAS and City Prom to develop “Traffic Free Days/streets” in the CBD and identify sections of that are suitable for trialing separated bike lanes such as “Copenhagen Lanes

3. Maximise bike and pedestrian potential of the new flood levees to develop commuting and recreational pathways.

Specifically, support the development of quality bike lanes in Holbrook, Lindsay and Gleadow Sts and in the redevelopment of Tamar and Charles St Bridge intersections including bike lanterns in signalling. Investigate extending current bike/pedestrian tracks under Tamar St Bridge.

5. Support City of Launceston to take leadership role in driving internal and community cultural change for a healthy city.

Specifically, this would include but be not limited to supporting City of Launceston to:

TBUG is taking an active role in supporting the Transport Committee by providing data collection, recommendations and stakeholder feedback for bike-related projects including the Launceston Arterial Bike Route Network, parking infrastructure deployment and the development of recreational trails and commuter routes.

TBUG worked with Council in the development of the City of Launceston Transport Strategy 2020 – 2040.

Involvement with other councils

TBUG has been instrumental in the deployment of infrastructure by providing recommendations from cyclist perspectives and community feedback to the West Tamar, Northern Midlands, Meander Valley and George Town councils.

Over the last few years TBUG has worked closely with Bicycle Network Tasmania and the Tasmanian Bicycle Council to advocate on state issues such as passing distances, improvements to major highways such as the West Tamar Highway, the North East Recreation Trail and Tourism Strategies.