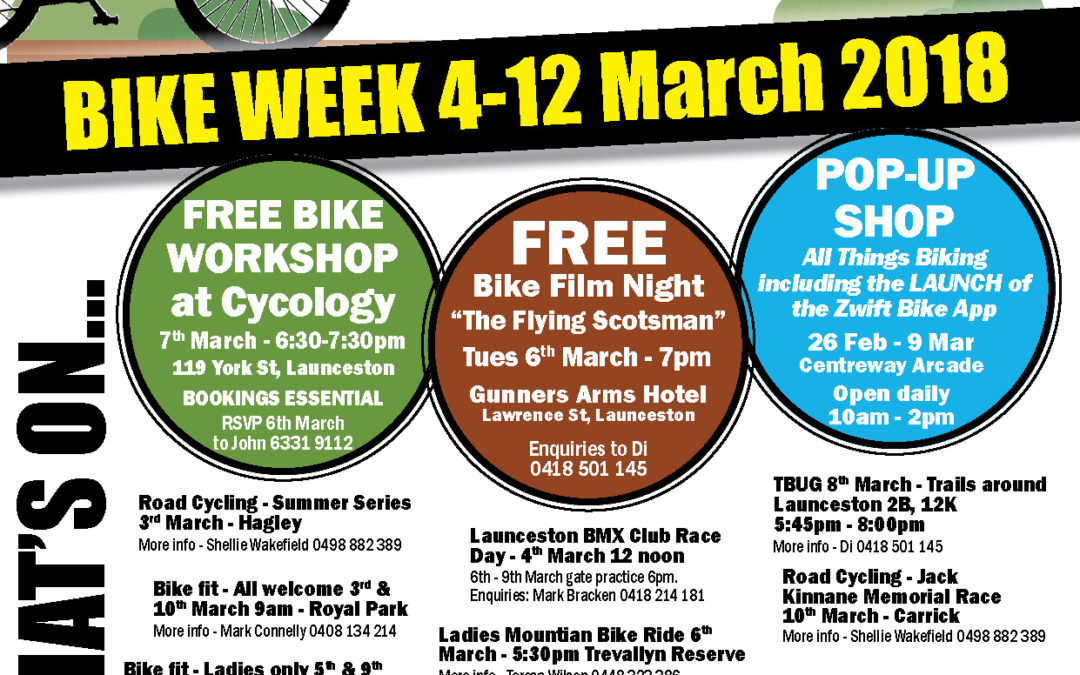 Make a fresh start and get into State Bike Week 2018

Tamar Bicycle Users Group, (TBUG) is encouraging northern Tasmanians to make a FRESH start on a bike and get involved in a range of community events during Bike Week 2018 from March 4 11.

“Bike Week 2018 will push off with a community ride around Heritage Forest on Sunday March 4 from 10.30 am starting at the Churchill Park carpark.”

“This is a family friendly ride for all levels and ages from kids to seniors.”

“There will be a short easy route and a comfortable longer route around the Heritage Forest and Launceston trails.”

“We are hoping that people who are starting out or haven’t been on the bike for a while will be able to make fresh start in life and come along,” said Mr Reid.

“The health and social benefits of bike riding are increasingly obvious. A recent UK study found that regular cycling reduced heart attacks and cancer diagnoses by 50% – a staggering result.”

Mr Reid pointed out that other events during the week include a bike themed film night showing The Flying Scotsman on Tuesday March 6 at the Gunners Arms, and a bike maintenance workshop on Wednesday, March 7 at Cycology bike shop

“A highlight will be a demonstration of the Zwift bike gaming and training app at Enterprize on Friday March 9 from 5:00pm by well-known cyclist, Wes Sulzberger.”

“We will also be running a pop-up shop in the Centreway Arcade from Monday February 26th for two weeks.”

“Anyone can drop in and pick up a Launceston City cycling map and ask any questions and get some advice about all forms of bike riding around the Launceston region.”

“TBUG would also like to thank our supporting organisations including St. LukesHealth, City of Launceston and Healthy Tasmania.”

Mr Reid pointed out that during the week there will be lots of other rides of varying distances and ability levels organised by TBUG and partner bike organisations.

“These include Cycling Tasmania, Launceston BMX and Mountain Bike Clubs, She Rides, and Women’s Friendship Group.”

“This year there is something for everyone. The full calendar of events can be found at www.tamarbug.org.au